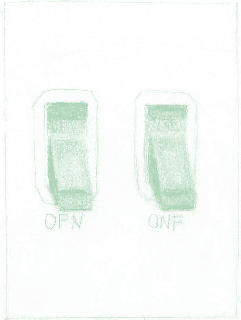 Just because the switch had been turned on by a stranger, didn’t mean she couldn’t turn herself off. All night long, dreams slithered around her wrists, tangled in vines along her torso, winding her one way and then another, red and white petals across her breasts, until she woke up feeling poisoned and dizzy. Yet through the dream fog, she also emerged a heroine: she and her mom had saved a beautiful fawn. But would a heroine need a man to be whole? He had made her touch herself. An inaudible groan crept from her throat. She sensed her mother at her bedroom door. Funny how she could feel her outside, silently waiting to say, Ari, are you up yet, honey? Her mother didn’t say anything. Waited. Turned around. Ariel heard her light footsteps down the hall. In half an hour, her mom would be back. She would guide her as if by remote, on the other side of the closed door until she and Ariel were both out the door and Ariel’s striped leggings slid into the Lexus.

In the car, images flooded her like waves: the spiraling vines, swirls of pink, the frantic hooves of the fawn. Ariel’s disturbing dreams, the pink experiment, and the baby deer still tingled in her. Silence pounding inside her, she couldn’t explain this colliding ocean of new things. It might kill her mom to know what happened last night with the videographer. The baby deer and its mother could have been a dream. The closeness of Ariel and her mom evaporated into small talk. Do you have enough money, her mom asked. His soothing cell phone voice imprinted in her mind. Uh yeah, she said, not remembering why she needed money that day. She wanted to tune into nothing but him. The fawn running back into the forest. So, you’ll take the train to Sasha’s, her mom said. She muscled the switch down to make certain it stayed off. Right, Ariel said, I’ll call you when I get there.

As she got out of the car, she blew her mother a kiss that felt traitorous. The fawn vanishing. Over her shoulder she yelled out to her mom, do you think the baby is okay? Her mom was wearing sunglasses and she leaned out of the open window and said, yes, I’m sure she is happy with her mom in the forest. She rolled up the window and her mom’s car was soon out of sight.

Ariel knelt under a tree and retrieved the text. It said: Where shall we three meet again in thunder, lightning, or in rain…which she knew from English 101 was from the witches in Macbeth. Three, she lightning-texted, forgoing the question mark. Was he bringing someone with him on the shoot? He didn’t answer for a few minutes. How far away was her mother now? Me, you, my camera, he thundered back. Ah, that was three. Would her mom turn back and see her kneeling beneath the tree? Then he added, 4 pm today, at McDonald’s, the one you all go to. So it was a Scottish journey, from Macbeth to McDonald’s, she thought. Creepy that he thought he knew where they all hung. They actually hung out at Starbucks but she didn’t tell him. It was better to not run into anyone she knew.

And did he know about her real home, Scotland? The country where she was born and still obsessed about. The foggy details of her childhood: a white wood house, black iron gate, cliffs, lunches of haggis and potatoes. Her Scottish burr was her secret, real voice. Often she wouldn’t answer people quickly—she had to put on her American voice. The awkward lag time seemed to irritate people. If she let her accent come through, would the videographer think she was alluring and foreign, too shy, or just strange?