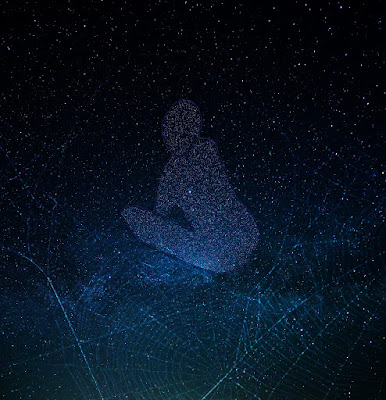 Her spindly fingers covered in rings, Spider tapped her lightning fast thumbs on her cell phone as a way to take her mind off Leif. She’d sit in her locked bedroom laughing at the sentences she typed—putting it on vibrate between her legs giving herself a buzz of energy to complete a chapter. At work and at home, she’d sit on the subway, on her 20 minute commute to the doc company where she edited films. She’d sit on the toilet typing away. She had even perfected writing inside her purse during a boring history lecture at her community college. One cold morning, she noticed a guy across from her on the subway, staring at her hands—only then did she realize her thumbs were sore and bleeding.

The first stories she wrote described her generation—hipster people entwining and then un-entwining, even more hipsterish scenes of their apartments and plants and permaculture and organic, raw food, and Arctic Monkeys playing while these hipsters conversed in an emotionless patter that belied the hormonal ripeness and urgency that led to much grinding under their 100% bamboo sheets. Then she wrote her cell phone novel The Silver Filament. She poured all her feelings into it and still it seemed almost as numb as she felt most of the time after Leif had told her to forget him. But she couldn’t forget Leif – just the thought of his name made her remember the large tree where they had sat under, where Leif had kissed her as autumn leaves twirled to the ground. She broke down and called him—a jumbo, 747 mistake. Walking by the coffee shop where they had first met, and her fingers pecked the numbers. He answered. O, god.

My miniscule novel is numero uno, she told him. What? His voice sounded as if he was still in bed. Like most musicians, he never got up before the crack of noon. Who… It’s me, Spider. Oh, he said, but it sounded like oh no. I wrote a novel on my cell phone. She wished she could tell him the exciting news face to face. She had uploaded the equivalent of 400 manuscript pages and the site emailed her to say that her cell phone novel was number one. Good for you he said, verbally patting her on the back, as if he didn’t even know her. She wished he had said something cynical like, so what—words that would break through her jammed feelings. She wanted a lover with a smoky voice to say, Oh, baby, your words turn me on. For him to recite her novel as he brushed and braided her hair. For him to open champagne when she rose to #1. When she imagined telling her parents, she saw her father turning a darker shade and her mother staring at her in disbelief. Why waste your time writing, her father would say, you’d be a much better lawyer. Her mother would try to force an understanding look on her face, but Spider knew that she was counting on her only daughter to get a STEM degree—just like she had. Her mom Sasha loved watching the sky, her telescope tracing bright silver lines of newborn universes.

Spider held the phone further away, embarrassed that she had called Leif. What could she say? He had no words to help her. The silence was epic. Stupid boy. Who was in is bed, covering up her mouth, muffling her giggles as he mocked Spider on the phone—rolling his eyes and shaking his head.
So I think I have pneumonia, she blurted out. Didn’t even know you had old-monia, he said. He was even clever after staying up all night, with someone else. Ha ha, she said and hung up.

We surrendered our plump tissues, coyly bled. We grew whole without heads. They shaped us like cuts of meat—an organ soup kitchen for those in need. We made them close the doors to dampen the noise of their machines, to hear our own currents pulse and the big data of the world we crave. * Do you need us, Spider? You have always rooted yourself in art, steadying yourself in words, the screen, its glowing scroll of stories. Let us merge with Ariel, dizzy with pink, tangled in vines, shivering and soft as the fawn. Before she falls into the well of shadows.