When Ariel arrived at Chestnut Forest, she searched out three trees and on the third was a sign for Insley Manor. Simple. But there was no man in a wine-colored sweater. No guy wearing a yellow backpack. No feather. She saw the videographer down a ways on the path from Insley Manor, walking quickly towards her.
She yelled, hey, I don’t even know your name. He shouted, you can call me Gary. She didn’t like the name Gary and felt a sudden sadness being surrounded by all the trees in the dusk. What? he said, as he approached her, looking for a feather, little girl? She almost turned, ran back to Sasha’s. He said, follow me.
He took off down a road behind the forest that led to a condemned movie theatre. Like every kid in the area, she knew about this dilapidated place but had never been inside. Usually boys messed around in the theatre and bad girls visited them. Gary kicked the lock on the broken door, and they walked up the stairs. She could hear him panting from the exertion of carrying his camera and trying to keep up with her.

After three flights, they came to the balcony.He muttered something like, I wanna get some tight shots. His flushed cheeks made him look younger, and a jolt charged through her. In a matter-of-fact tone he told her, strip down to your underwear, and then, without looking at her, he set up his camera.
She had never taken her clothes off for anything other than a shower or a doctor’s exam, so she she felt wrong in her underwear as she walked over to him. He barely glanced at her and motioned her to the auditorium seats. The theatre was clammy, she could almost see her breath and she said, I’m freezing. He lit a cigarette and said, do something hot.
She flushed, temporarily paralyzed. He said, straddle the arm rest—like you’re riding a horse. It was awkward to balance that way, but he looked pleased after he put his camera down. He pointed to the floor and said, down. She remembered the crayons in her backpack and said, I have an idea. That’s good, he said, creativity is arousing.

She took the magenta one and pulled down her underpants and stuck it inside her butt like a thermometer. Perfect, he said. But it didn’t feel perfect. Her face was on the cold sticky floor and as she wriggled, she heard him say, this will be a great video, Adventures with Crayons.
His laugh was sickening. He stood above her and said, that’s good enough. She got up and he covered her up with his overcoat. Let me scan the place for other shooting possibilities, he said. Oh yeah, he said, pointing to a tiny alcove on the floor below. She grabbed her clothes and backpack and followed him down the stairs.

He lit another cigarette and she asked for one too. He said she was too young for such a nasty habit. They both laughed. He told her, sit down and dangle your legs as if you’re dipping your toes in a river; only could you please spread your legs pretty wide and lean back and remember to look real relaxed. Coming right up, she would have said if she hadn’t been shivering so much. She thought she heard him whisper, I’d like to dip into you. She prayed for repulsion, yet her insides pinged as if she wanted something warm from him, as if she needed him, while all she wanted was for him to need her. He took a long drag and looked back into his camera.
I’ve had enough she said and climbed down from her pedestal. She put her clothes on—as if the building were on fire—and ran down the stairs without saying goodbye. 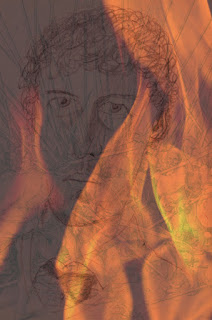