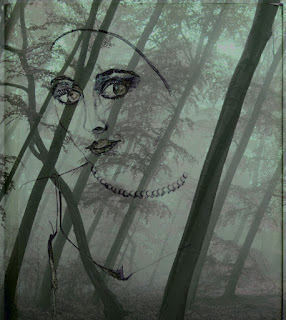 After the meeting at McDonald’s, Ariel arrived at her Aunt Sasha’s and waited for her cousin Spider to get home. Sasha was taller than her mom and more laid-back. Of course, she found that most people were more laid-back than her mom. Sasha used to be an astrophysicist but now she was semi-retired and had become a life coach. She was always open to the next ecstatic moment and she said interesting things to Ariel and Spider like, don’t extinguish all the fires within you. Today, Sasha was clearing out a cabinet filled with art supplies. Do you want some crayons, she asked, they’re good ones with cynical names like tainted tan. Sure, said Sasha. She felt a text come in. Dropping her backpack, she said, I’ll be right back, Sash. She went to the bathroom, sat cross-legged on the furry white bath mat and read:

Go to the third tree, unbutton your blouse, find a feather in the knot of the tree, wait for the man who is wearing a wine-colored sweater and a yellow backpack. When he arrives, hand him the feather and let him stroke you with it under your blouse, and when you are ready, lift up your skirt, and let him stroke you everywhere there. Stay a few hours or leave whenever you want. Arousal is creativity of the glands. Create yourself. Let him create you again.

She hugged her knees tighter. She was certain this couldn’t be from a boy her own age. Her head whirled and she texted, the third tree, where? He wrote, at Chestnut Forest, on the path to Insley Manor, before dark, today, hurry. She went back to Sasha, who handed her a box of crayons. I have to go to the library, Ariel said, zipping the crayons into her backpack, to do some homework with a friend. Okay, said Sasha, you seem kinda distracted. Everything okay? Yep, she said, hugging Sasha. Tell Spider, I’ll catch her later. Sasha said, be back, no later than 8:30 tonight. But the library closes at 9. Okay, said Sasha, a bit after 9 then.

As luck would have it, Chestnut Forest was only 5 minutes from Aunt Sasha’s. Under street lamps, cell phone in her hand, she read the text over and over, running the whole way there.