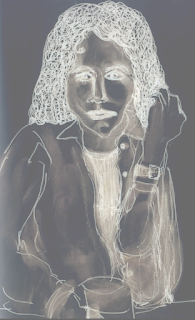 Bleary-eyed from the baby deer she and her mother had saved the night before, Ariel squinted at the man coming through the dark forest of cars. He was tall, craggy, and had a full head of hair. She almost decided to walk away, but he seemed to recognize her and shook her hand, the strength of his grip attractive even though he was old and as sinewy as a druggie. He asked quietly, are you under 18. She was actually just shy of 15, so she nodded. Good, he said. And handed her a bag. What? Check it out later, he said —with your friends. She didn’t bother telling him she didn’t really have friends. Or that her only friend was Spider, who was her cousin, so that didn’t count. He looked around furtively and whispered in her ear, put it in your backpack. His breath smelled of cigarette and mint. She followed him into McDonald’s. The air was too bright as she slid into the booth. If she saw anyone she knew, she could tell them he was her uncle. He didn’t look in her eyes even though they sat across from each other. He rested his gaze above her head and said, let’s go order and then we can get to work. She bounded up, and he followed her. Were his eyes on her black leggings? She sensed his gaze stripping her down. He paid and they sat down again. This time he looked at Ariel and smiled. From her raggedly-cut peach-colored t-shirt, the top of her breasts peeked out. Her long necklace of bullet casings stuffed with sea glass bobbed up and down inside her cleavage as she hyperventilated. He didn’t seem to notice, just lowered his eyes to her necklace and continued smiling.

Finally he said, I can’t wait to get my...camera on you. She blushed, took a bite from her burger, and said, I’ll have to think about it. He reached his long arm under the table and squeezed her knee. I totally understand, he said, there’s a lot of weirdos out there. He watched her, and she bit her lip in the silence. Then he leaned in and said, you know, I’ve changed my mind. I don’t feel like working with you today after all. What’s wrong, she asked. I’m just not feeling it, he said. She suddenly felt afraid, alone, thought of the trapped fawn in the window well. She put her hand on his wrist, and he pulled his hand away. Well, she thought, she had only wasted a half hour and there was still time to get back to talk to Spider. Maybe she would even tell Spider about what was happening to her. That’s cool, she managed to say and her fingers clutched the bullet on her chest. He stood up—a better vantage point to see more of her breasts. Her stomach felt sick and hungry at the same time. She slid her hand under her shirt to rub it. He smiled again, this time showing his chipped, yellowed front teeth. It’s okay, he said, it’s not you. She felt no relief. We can meet in a couple of days, he said. This made her think of the word, “couple” and she wondered if he had a wife or a girlfriend. Maybe a kid. His thighs rustled in their corduroys as he waited for her answer. Sure, she said and didn’t look up. There was a heavy pause as he stood over her. We’ll do a real photo shoot then, he said. She thought of models in front of wind machines, and she tossed her hair. He took a curl from in front of her eye and tucked it behind her ear. She almost winced even though his touch was gentle. Thanks for the burger, she blurted out, before he said ciao and walked out. He disappeared into the parking lot, his head high like the deer’s vanishing into the trees. She felt a confident surge diminish the knot in her stomach. He’d be back.


You think you shine rubescent, but you’re hidden to yourself. We were almost cut off from you. Now we hear murmurs of your life. We want to feel through you, your heart’s troubled, anemic pulsing. Danger hovers near you. We are reaching out to you. Can you feel us?